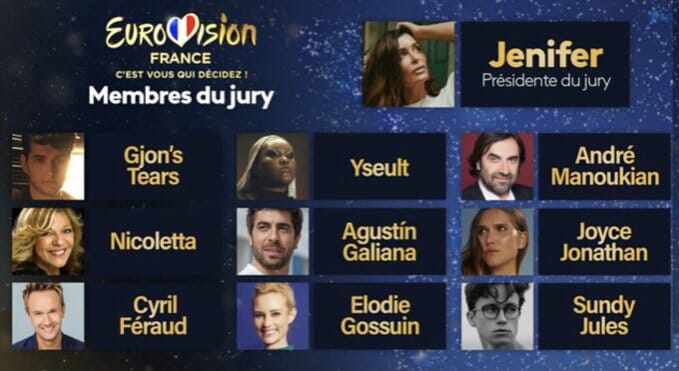 During a press conference dedicated to Eurovision France in Paris, the broadcaster revealed the long awaited names

With the preparation of the Junior Eurovision last December in Paris, France was a little late in organising its national final Eurovision France C’est vous qui décidez. After several weeks without any information, they have been pouring in over the last few days.

Yesterday we learned that the date chosen for the broadcast of the final was Saturday 5 March. Today we have learned the names of the candidates and the songs. Without further ado, here they are:

The candidates will be judged on the evening of 5 March by a jury of 10 personalities and by the public. This panel is composed of five French people and five foreigner, Jenifer will be head of the jury. During the evening, the artists will present their songs,  in a first step, the top 5 songs from the public vote are selected for the final vote. A sixth song will be chosen by the jury to advance to the final stage. From there, the artists will be judged by the jury (50%) and the public (50%).

The jury will be composed of the following personalities:

André Manoukian – French singer-songwriter and pianist, member of the jury of several music shows in France

Have you already listened to the songs? Who is your favourite for the French national final? Let us know in the comments below!