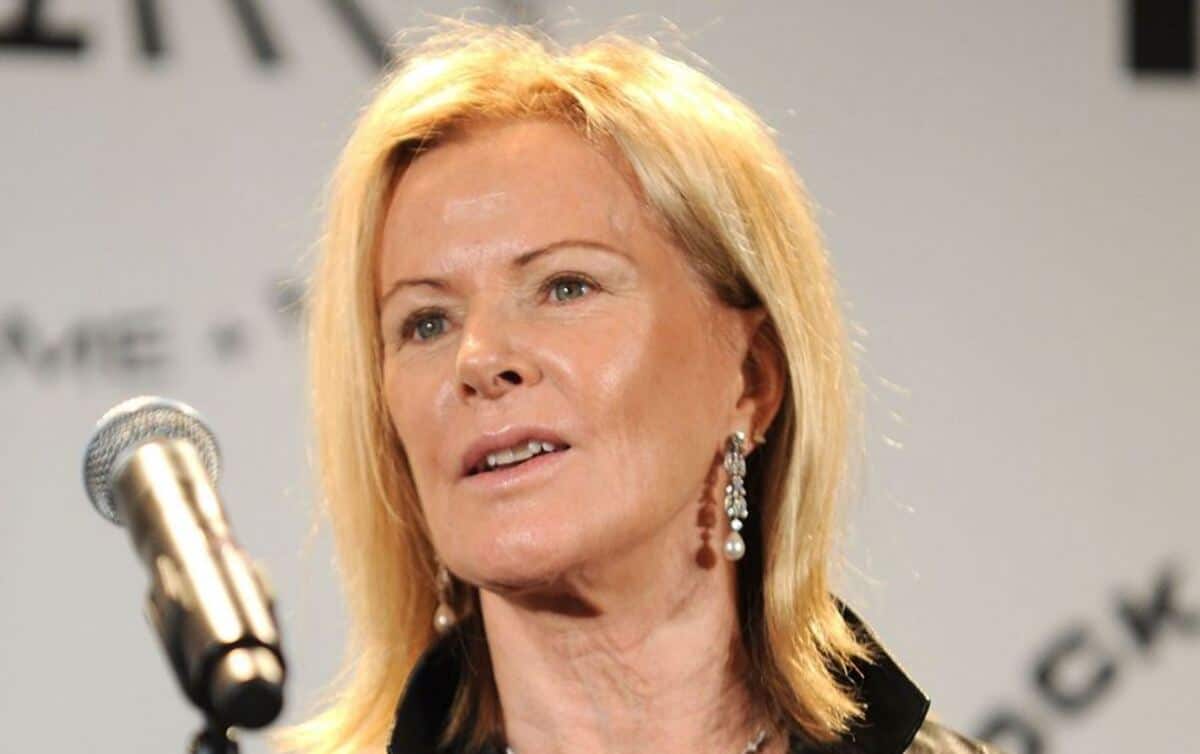 In an exclusive interview with Zoe Ball on BBC Radio 2, Frida discusses the ABBA reunion, whether this IS really the end of the group, and her thoughts on Eurovision! 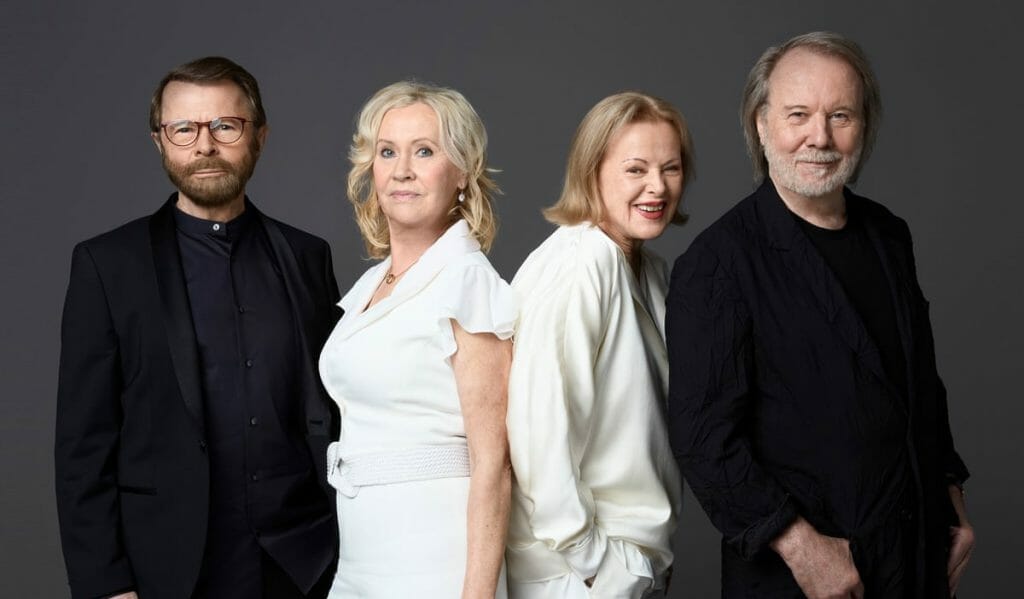 One of the voices fans have been waiting to hear...

It has been widely stated by Benny and Bjorn that we were unlikely to hear from the ladies of ABBA – Frida and Agnetha – as both had declared they did not want to be involved in any of the promotion for ABB’s new album, and that this was really a deal breaker when it came to recording the supergroup’s ninth studio album.

So fans around the world rejoiced at the news that Frida would be taking part in an exclusive interview on BBC Radio 2 in the UK.

''We don't have to prove anything''

Frida is reminded of the incredible success of ABBA’s new album in the UK alone (the album currently outselling all other albums in the Top 40 combined), and her reaction to this:

”Yes of course we are pleased, because we didn’t expect anything actually and it’s always like you’re a bit nervous when you release something new, but if I compare it to how it was 40 years ago, its a bit of a difference because I would personally say that I don’t take it that seriously as I would do earlier on when I was younger, because then it meant to so much. But as Benny said in an earlier interview – we don’t have to prove anything – so we have just done it for the fun of it, and that’s a good feeling actually. And then when people like it, that they seem to do, then of course its wonderful.” 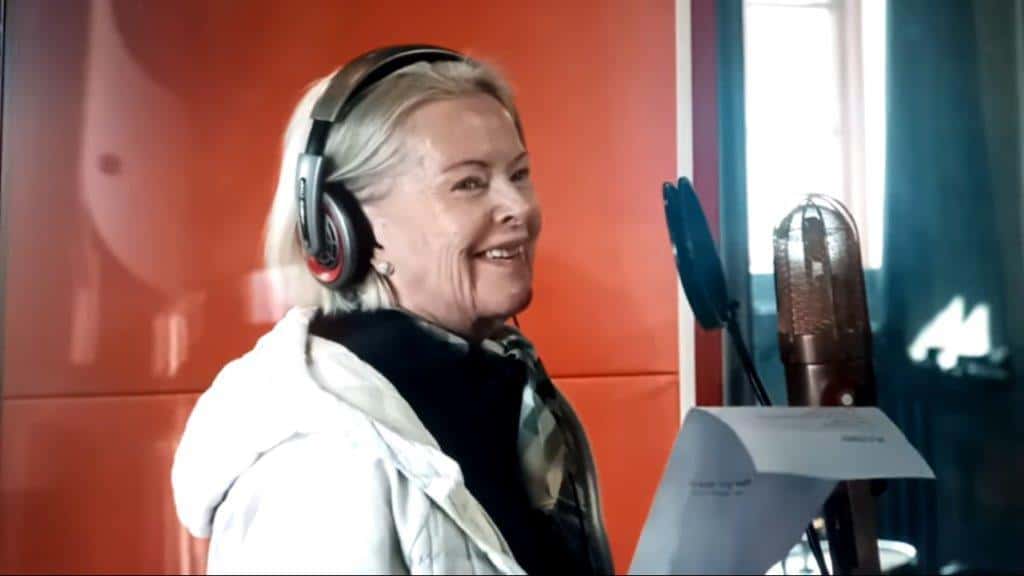 ''It was with anticipation that I went to Sweden into the studio...''

When asked if it took very long to decide that she wanted to work with ABBA again, and what the deciding factor may have been:

”We have never stopped working together, because we have had meetings, concerning different thing over the years, and we always stayed in touch more or less over the years as well, and when this idea with the ABBA digital, or the ABBAtars as they are called came up, then Benny suggested that we should maybe have a couple of new songs on that show, so that’s how it started, and it was with anticipation I went to Sweden into the studio to meet with the others, because its always fun to work together with them, so that was a feeling I had – I mean comfortable – a little bit tense maybe, but we also decided if it doesn’t go well then we don’t have to release it.”

Read our review of the new ABBA album here... 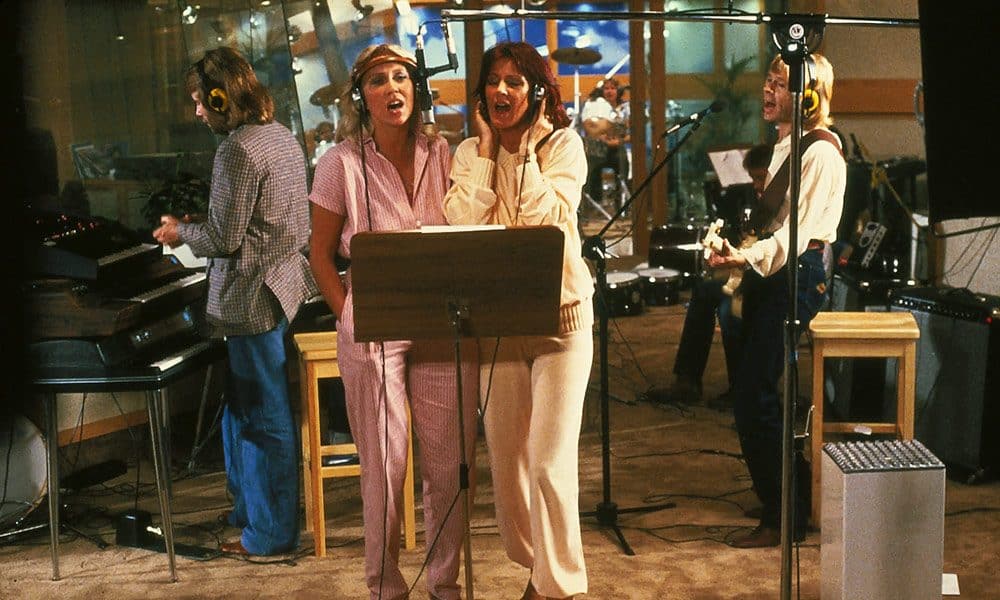 ''It's always magical to sing together with Agnetha''

When asked how it felt singing with Agnetha again, and their voices together in the studio:

”It’s always magical to sing together with Agnetha, because we have something special as you know, not only voice wise but also as friends. Once we closed the door behind us in the studio we felt at home, both of us, so what can I say – coming back home again having fun with my little sister – that’s how it felt.”

''Agnetha is an absolutely wonderful storyteller...''

When asked about the process for deciding who will sing lead on an ABBA song:

”You know we actually go into the studio and rehearse first, so usually we sit in the control room and go through the lyrcis and the keys, and as we know Im a mezzo soprano, maybe I’m even lower nowadays and Agnetha is a soprano, so as Benny writes the songs in very big range vocally, it kind of shows itself when e start to sing, and whois the better oine on a song, but I must say to Agentha’s favour that she is an absolutely wonderful storyteller, she has something magical in her story telling, which I unfortunately do not have the same way, or maybe that is good because that means we kind of sing the lyrics and the songs in different ways. And as the fans always call it when we come together – the third voice – is very present. And if I don’t feel comfortable with a song, and I know that this  would be perfect for Agnetha, then I just say it – we are very honest with each other – I would never do anything that I know that maybe I wouldn’t do so well as Agnetha can.”

Referencing Frida’s vocals on the new track Bumblebee, Frida is asked about whether she is concerned about bumblebees and pollinators:

”I’m concerned about everything that happens in the world right now, like all of us are I assume, and I think we have a little Queen in Sweden – Greta Thunberg – raising her voice for everything an I’m very proud of her I must say – this young person getting all these young people with her, and I sing this song with my heart because if we don’t have the bumblebees or the bees in general, then we will not have a lot of other things either. They are very important.” 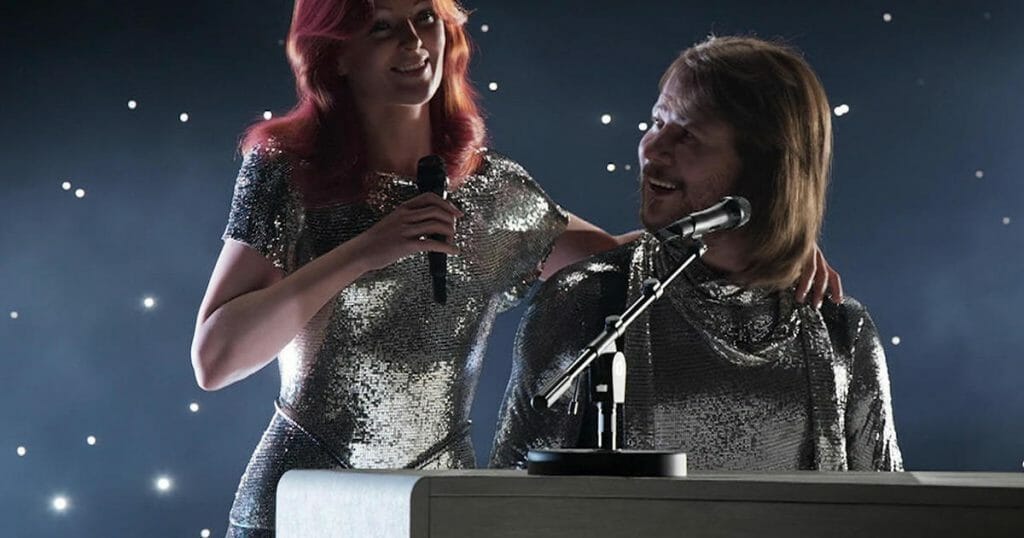 Speaking about how it feels to be recreated as an ABBAtar:

”You know it feels very very good because of the fact that all of the people working with us on this projects are such wonderful and creative people, I mean its very exciting I didn’t know what to believe at the beginning, but getting into it we understood more and more because it was hard to comprehend I must admit, but now we see some of the results and I’m very excited about the whole thing.”

When pressed on what people can expect to see:

”I actually wouldn’t like to talk about that – they have to go there and see for themselves – because as I said before – its quite difficult to explain what it is. So they just have to keep their eyes, and ears and minds open, and take it in and then I’m sure we will have a lot of comments about that when it happens.”

''We have a strong bond with the UK that maybe we don't have with any other country...''

When asked how much of a role the UK has played in the story of ABBA:

”Oh – UK has been very very important for us. I think we also in a way we have a strong bond with the UK that maybe we don’t have with any other country in the world, as we’ve been there as much and we’ve done so much, and I even lived there for some years, and I’m sure you know that Bjorn did as well. So I have a strong bond to UK and especially to Henley-on-Thames where I stayed for some years. And also there I met the man I live together with now, we’ve been together for fourteen years, so I call him my bloody Englishman strong bonds, connection with the UK” 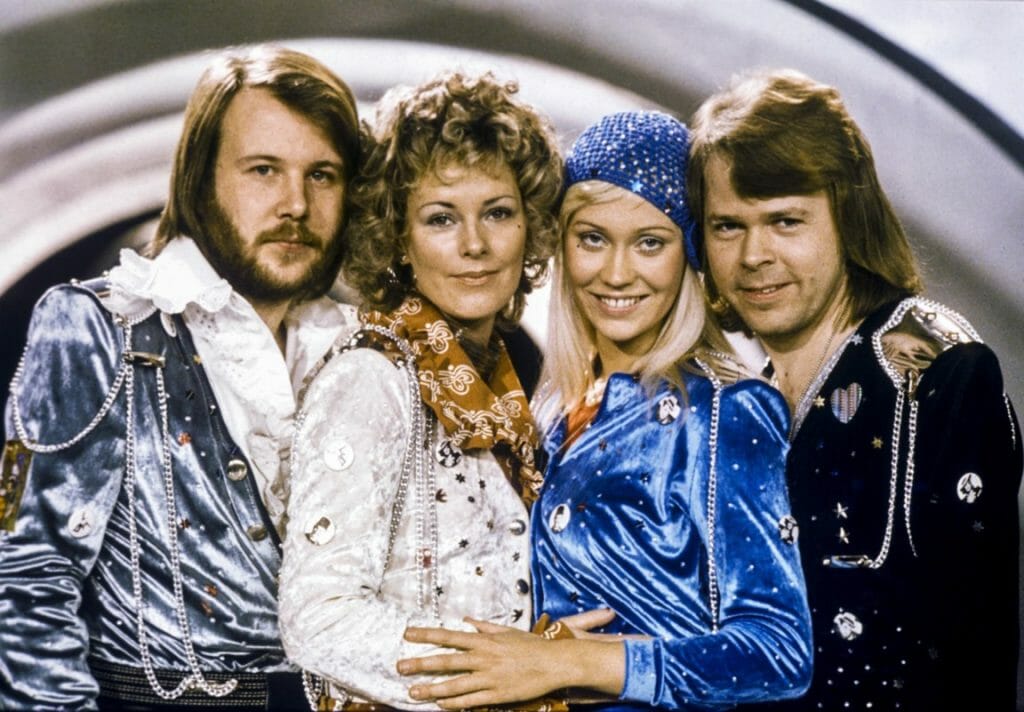 Reminded of how ABBA first came to the attention of the UK after winning Eurovision, Frida is asked if she still follows the contest:

”I’m sorry to say no I don’t – I’m not so interested, because it has changed so much over the years, and you know it is not what it was at that time. Now its more like a show its very technical, and there are some good songs coming out of it, but I cannot say I’m a fan of Eurovision – maybe I shouldn’t say it – but I do it anyway.” 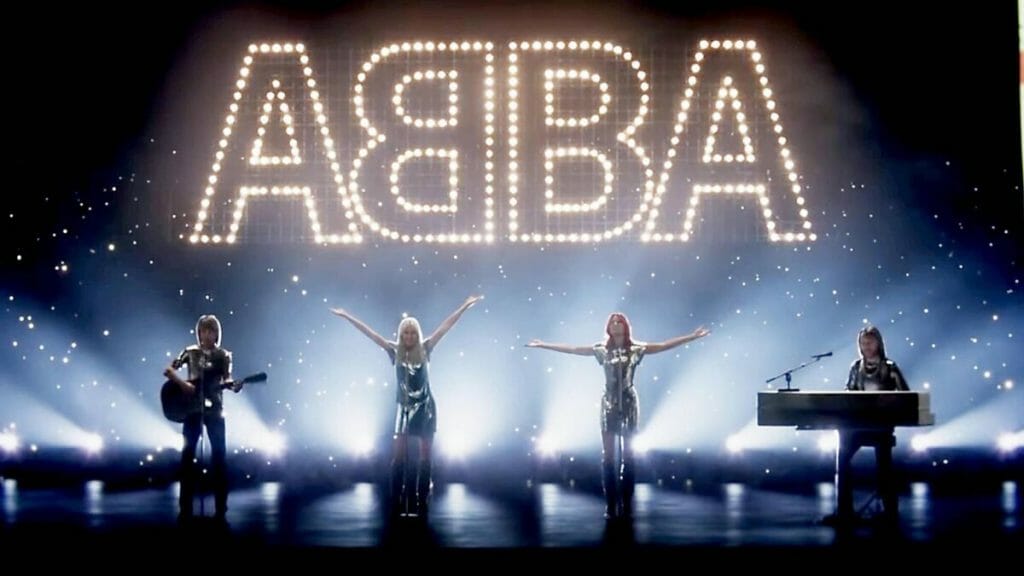 When reminded that it has been made clear that the Voyage album and show will be the last actions by ABBA a a group:

”You know to answer to what you first said – I have learned to say never to say never, and I’m very surprised that Benny and Bjorn – and I cannot remember that is – yea we have probably said it must be the last thing we do, because also thinking of our ages, you know we are not young any longer, and you never know. But I’m saying you never know, so don’t be too sure.

But to answer your other question on how we want to be remembered. I want the band to be remembered like a band who made people feel something in their hearts, when they listen to our music. I want to be remembered as a member of the band who helped people, to give them comfort, that gave them happiness, that we were there for them – we did it for them – and for ourselves also of course. But I’m so happy that people are so touched by what we do, apart from some very sour critics but we don’t care about them!”

Frida has left us with hope!

One thing fans will be taking away from the interview is that there is STILL hope that Voyage may not be the last we hear of the supergroup. Much has been said over recent weeks that this was potentially the end – but Frida has left the jar slightly open again, and this will leave fans around the world with the excitement that perhaps this really isn’t the end – but potentially a new beginning!

POLL: What is your favourite song on the Voyage album?