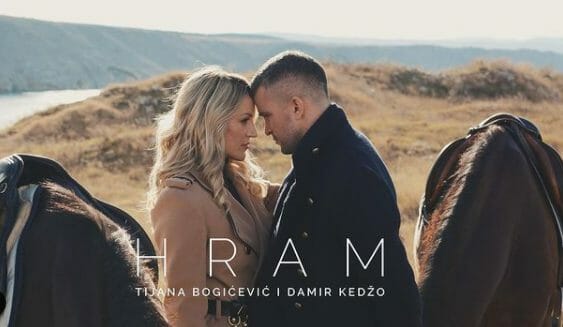 Damir Kedžo and Tijana Bogićević have teamed to give us the Balkan banger, “Hram” (Temple). This is the first time Damir and Tijana have collaborated together on music.

Damir and Tijana have worked with a whole host of Serbian and Croatian music professionals, including Aleksandra Milutinović and Dušan Alagić, who both worked on the lyrics, composition and arrangement of the song.

The music video sees Damir and Tijana dividing their time between the beautiful scenery of Rijeka in Croatia and Sugar Palace, whilst working with Horses from the Njivice Equestrian Club.

Tijana Bogićević is a Serbian singer who started out her career in 2009 with the release of her debut single “”Pazi šta radiš”. She was a backing singer for Nina at Eurovision 2011 before taking the stage alone in 2017 when she represented Serbia with “In Too Deep”.

Damir Kedžo is a Croatian singer who started his career in 2003 when he participated in “Story Super Nova Music Talent Show”. He has since gone on to release two albums and a handful of singles. In 2020, he was crowned the winner of DORA with his song “Divlji vjetre”, and became Croatia’s Eurovision representative.

Have you heard Hram yet? What do you think of the song? Let us know in the comments below!