Tech Evolution: Behind The Scenes of Eurovision with Former Producer!

Ola Melzig has worked on 12 Eurovision song contests since 2000, including acting as the Head of Production.  Speaking recently on the interview series ‘Humans of Eurovision‘, he catalogued the technological evolution of the contest over the last 20 years and shared some fascinating behind the scenes anecdotes!

Ola’s recounts his first experiences of the tech evolution in Stockholm 2001.  This was the year, he says, that the Eurovision moved from a moderate production to a full-scale televised arena show.  He also explains that it was the first year that LED video panels were introduced.  Not only that, but the LEDs were mounted on remote-controlled, wireless, moveable dollies, a major advancement in television.

He explained the challenges: “One of the things that we added to Eurovision that has created by far the most problems is the use of video screens and projections, because anyone can have opinions about that.  They have such a dominant effect on the whole performance”.

In 2002 they introduced media servers to provide video input to the LED screens — a world first!  He also recalls an amusing situation that arose in Estonia 2002.  They had spent so much money on servers, screens, projectors and mirrors that they had no budget remaining for producing the video content.

“It turned out that it was a married couple that worked for the sports division of the Estonian television…after they were done with their daytime job…they went home and sat and created all the digital content for Eurovision 2002 in their kitchen…every morning on their way to Estonian Television they came by the venue and dropped off a hard drive with new video content”.

Before the years when countries’ delegations began to get more involved in the video design, he recalls how one year they had produced bright red visuals for the Cypriot entry, which was problematic due to the association of this colour with Turkey.  He also recounts how his production team overruled on the video projections for Poli Genova (Buglaria, 2016).  The Bulgarian delegation had requested “rivers and forests and nature shots, mountains for their performance and this was a very electric song with Poli — super cute, beautiful girl, great singer, really energetic performance.  When we heard the song and we saw the wish we were like….no.  So we gave her a very electric video”.

He explains how other elements of the production continued to evolve: form 4:3 aspect to 16:9, from SD to HD, from seated audiences to standing, and from stereo sound to 5.1 surround sound.  These advancements have continued with the use of holograms in 2016 and the use of augmented reality (AR) in 2019.  In Tel Aviv, the production team had tracked 5 cameras to 1000 foil markers to allow for the use of AR.  Speaking of AR he says: “You have to be clever when you use it because it’s very easy that it overpowers the whole performance, takes away the focus from the artist and just turns it into something really cheesy”.

In the videos below:

Ovo has also shared some details on the challenges posed by moving props on and off the stage.  He explains how 50 stagehands are on standby to do 40 second changeovers between each song.  He recalls with mirth the switch between the performances of Australia and Spain in 2019: Zero Gravity to La Venda.

“Besides us actually allowing the team to put three girls on sticks, then we also had the producer deciding that Australia should be….followed by Spain.  They came in with a whole f***ing building.  And we still only have 40 seconds to do the changeover.  I have a videotape of that changeover.  It’s pretty historical…..it shouldn’t have been done but we did it”. 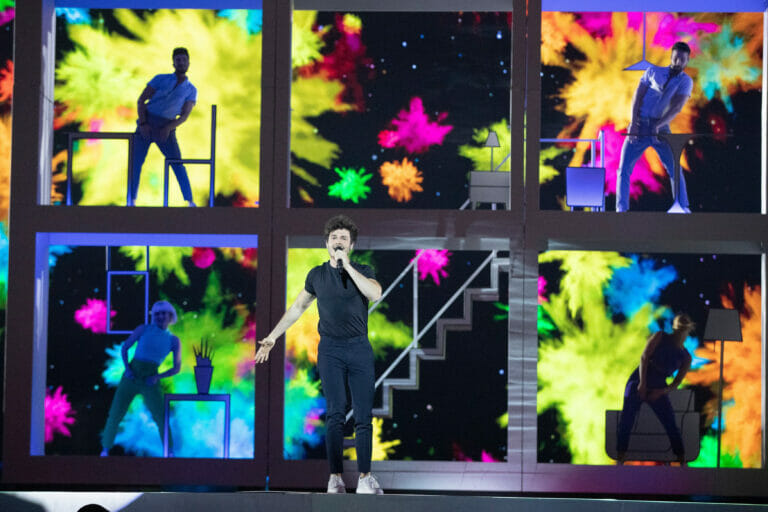 Ola revealed some interesting behind-the-scenes facts about how the final staging is produced.  Video footage is created in close collaboration between the delegations and a Eurovision video-content team.  Delegations submit a ‘mood script‘ during the Heads of Delegations meetings.  This describes with the use of word or reference images the look and feel of the song.  What does it look like at the start, the first verse, the first chorus, the bridge, and so on — the mood, the colours, the message.

“Once we get this information, we sit down and we have a big creative meeting involving all the designers, all the directors and production; and we exactly decide who will get what.  Because quite surprisingly you usually have three or four countries asking for fire and if we give them all fire, we’re making two mistakes.  One, we’re creating a boring show; two, we are failing on giving each song individual expression”.

Check out the full interview below!