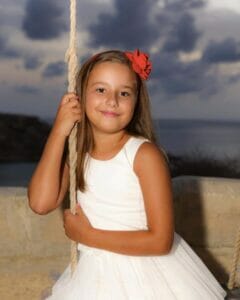 We have a result from Malta! It’s Chanel Monseigneur that will represent the country next month in Warsaw, Poland. She won with her song Chasing Sunsets, which was written by Emil Calleja Bayliss and is composed by her own cousin Aleandro Spiteri Monseigneur, Peter Borg and Joe Roscoe.

Chanel was born February 2nd 2011, making her 9 years old. Her singing career started with participating in local competitions. Just this last December was she awarded with being “The Best Singer Of The Year” in a local competition.

Malta is one of the 16 debuting countries in the first contest in 2003. Malta has won Junior Eurovision 2 times. The first time was in 2013, at their comeback after a 2 year break, when Gaia Cauchi and her song The Start scored 130 points. The second win was just 2 years later in 2015, with Destiny Chukunyere and her song Not My Soul. In addition to their 2 wins, Malta also hosted the contest twice, in 2014 in Marsa, and in 2016 in Valetta.

What do you think of Malta’s entry? Did the right singer win? Tell us in the comments below!