Next to 11 solo tracks, it also includes two collaborations: In the song Deja Vu, the Greek rapper Marseaux is featured. The two-times Eurovision representative and presenter of the Eurovision song contest 2006, Sakis Rouvas, is featured in the song Etsi Ine I Fasi.

The album combines both traditional Greek elements with a very modern sound throughout the songs including ballads as well as dance tracks. For the song Deja Vu, Paparizou has also released a colourful music video. 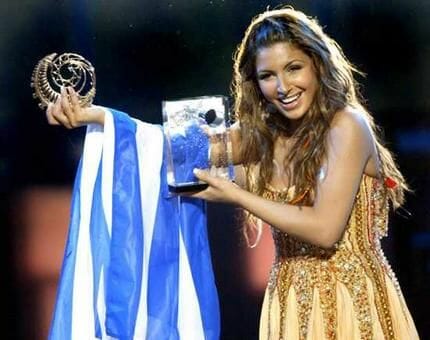 Helena Paparizou is pretty much a Eurovision legend. In 2005, she achieved the first and only victory so far for Greece with the song My Number One. Since then, Helena has established herself as a European celebrity and artist.

In 2014, she competed at the Swedish national selection Melodifestivalen with the song Survivor where she finished 4th. In November 2016, she was announced as a coach in the The Voice of Greece. Since Season 3, she has been working as a judge there, including the current seventh season.

What do you think of Helena Paparizou’s new album? Would you like to see her back at Eurovision someday? Let us know down in the comments.