From misfit to champion: the story of Portugal at Eurovision – part 2

Before an early-summer’s night in Kyiv, Ukraine three years ago, a nation had little to show for all its efforts in the world’s largest music competition, holding a record 53-year long absence of a musical champion. On that day, two and a half thousand miles from its shores, the nation finally earned recognition for a 5-decade long musical project that both acknowledged a rich culture and heritage whilst also showcasing what they had to offer on the global stage. It is impossible to understate the effort it took this team of ten million to reach this moment, grinding through several eras of music to pull off an improbable but illustrious victory.

As the World’s longest running televised music competition progressed into the new millennium, once more, the character and atmosphere of the contest changed. This was to be the era of “cool Eurovision”, a contest rapidly growing in attitude, becoming a contest that celebrated diversity on stage as well as off it. The year 2000 saw the first contest without an orchestra take place. Just three years later, the floor of the stage had LED projection lighting for the first time in history and in 2004, there were multiple shows, with a semi final taking place mid-week. Eurovision was growing in the most unforeseen of ways, expanding rapidly in all areas. In just 4 years between 1999 and 2004, participant numbers increased by 13 countries, nearly half an entire grand final running order. The nation was once again being urged to take a leap forward with Europe, and they did. 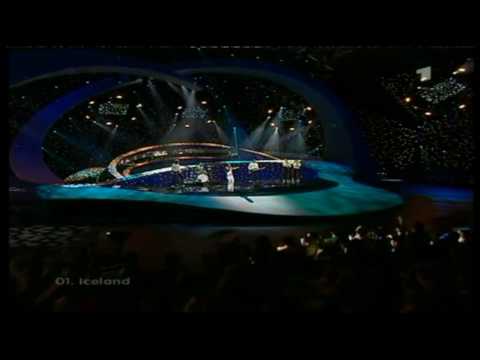 Iceland use the 2003 stage in Riga to full effect as LED screens on the floor are used for the first time (above) and Finland’s Jari Sillanpää opens the first ever Eurovision semi final in Istanbul the following year.

Despite missing the contest in 2000 and 2004, Portugal maintained their daring approach to the contest. Even though they failed to qualify for the first four years of the semi-final era, Portugal finished the 2000s very strongly, considering the influx of new countries and experimental formats from the European Broadcasting Union. The contest was growing more and more into a show that required visual experience to succeed, and both “Senhora Do Mar” and “Todas as Ruas Do Amor” are brilliant, energetic examples of this. The former boasted an enchanting ballad with a little hint of Saudade, including some of the most captivating backing vocalists and slow choreography I have ever seen; whilst the latter, despite its musical difference, similarly focused on staging to appeal to Europe. With colourful, giant LED screens, up-tempo dancing and a happy storm of lyrics, it too certainly benefited from a grander stage. In spite of their somewhat surprisingly low final scores of 13th and 15th place respectively, for me, these two entries are the most recent example of promising signs and memorable performances that built up to their record-breaking entry just around the corner.

It’s almost unbelievable that I’ve talked about Portugal at Eurovision to the extent I have done without even mentioning his name. After a poor qualification record since 2004, many bottom 5 results and even political turmoil, Salvador Sobral will be a name that lives on in the minds of Eurovision fans for a long time to come. What first seemed like a fairly ordinary love-ballad, later captured the hearts of the voters. Ultimately, I believe simplicity (a word Louisa, Salvador’s sister and the composer used over and over again in Kyiv) and distinctiveness are the two biggest reasons behind the Eurovision victory that once seemed highly improbable.

Even in a world of grand arenas, hundreds of millions of viewers and 17.5 million-pixel LED lights, (as we saw in Tel Aviv last year), simplicity has led to prove successful and even win contests. “Amar Pelos Dois” (Love For Two) is the clearest example of this. In an 18,000-capacity arena, on a 350 squared-metre stage, Salvador sung the quiet ballad on a small “stage island”, a podium separate from the main stage, surrounded by Eurovision fans. Nothing else was present except a modest microphone and a background depicting a green forest. He sung for three minutes without taking a single step. This level of simplicity is one that I believe subconsciously attracts fans to a song; It doesn’t instantly jump out from the running order, but it is still more than memorable after song 26. In addition, the song had a 20-second-long introduction, the longest of any entry ever. It features two extensive periods of pure instrumentals and very interestingly, it is one of the rare modern Eurovision songs that ends with a bridge rather than a chorus. Again, perhaps this adds to the subtle differences that stuck in voters’ minds.

In a segment with HelloLillyTV, the arranger of the song, Luís Figueiredo, highlighted the contrast between the song’s complicated structure and the simplicity of the song overall. He also stated that there is often limited rhythmic or instrumental diversity in the western pop scene and that it was one on the components of a song he tried to avoid to make it stand out, and clearly, it worked. By all accounts of the scoreboard, it was a tremendous success. It smashed the record for highest-scoring entry and even when the results are converted back into the pre-2016 voting system, that would still be the case, just beating out Alexander Rybak’s iconic “Fairytale”. Furthermore, an unprecedented seven countries gave it 24 points (top mark from both the jury and televote) whilst separately, on both sides of the scoreboard combined, Salvador received an astonishing 30 douze points. Recognition for the determined Eurovision outfit finally poured in.

Whilst controversial, one of the major things in Kyiv that was significant for me was Salvador’s speech that echoes Luís’ words above, “Music is not fireworks, music is feeling”, as he went on to express that the content of modern music is not up to standards. Whilst on a personal level, I do not agree with some of the ways chosen to express these views, I fully resonate with the general sentiment.

I will also never forget the deafening silence the massive arena was in during the entire performance, that then burst into an eruption of chants, “Portugal, Portugal!” not even seconds after his last lyrics. Furthermore, the camera showing Artsvik, the Armenian entrant, crying to the song after Salvador’s performance was absolutely heart-warming and perhaps one of my favourite moments of the entire Eurovision year. I think that despite our opinions on the song itself, we can take great pleasure in seeing Portugal rewarded in style for its more than half-century of efforts at Eurovision.

It must also not go unnoticed that the following year, Portugal hosted a spectacularly successful show and continues to use Festival Da Canção as a colourful outfit platform for artists. I particularly, think it was quite fitting that broadcaster, RTP, used a magnificent stage featuring several bridges and 3 platforms but with no LED screens. Perhaps this was a small homage to the Sobral message of simplicity, that great things could be done without everything that is modern.

It is because of these reasons that I’m sure there is still a lot of Portuguese magic to come. Through many levels of hardship, genres, musical and cultural movements, the resilience and passion of the Portuguese Eurovision team of 10 million is almost unrivalled and it is for these reasons in particular that I believe Portugal has, in every aspect, earned its moment.